The Guy With A Tablet.

This week I had to take my partially disabled wife Alex to Wandsworth in London for an assessment, pre-arranged by appointment. Getting there was no real issue. Outside rush hour, the train was sparsely occupied while she remained in her wheelchair throughout the whole journey. The interview itself lasted about eighty-ninety minutes. Afterwards, we had a look around at the huge gleaming indoor shopping mall, beautifully constructed, which rejuvenated this formerly ugly working-class district once blackened with soot from nearby heavy industry, where I remember walking through with my former girlfriend way back in 1971. Without having any wonderful memories of the area, to re-visit after more than forty years was indeed a culture shock.

But it was the return journey which had inspired me to write. Being the start of the evening rush hour, far more seats in the train were taken, except one which was right by the doors, allowing me to sit while holding my wife's hand as she remained sitting in her wheelchair. Directly in front of me were two male passengers. Both looking to be in their late twenties or early thirties. The one by the window had longish hair, sported a moustache, and was dressed casually with a shirt open at the neck. The other, next to the central aisle and sitting right next to the first, was a businessman dressed in suit and tie, and concentrating hard on his tablet. I was able to have occasional glances at his screen, which looked as though he was flicking through one image after another. Despite myself cracking jokes which brought bursts of laughter from Alex, (to lift her morale) this fellow remained stern-looking as he kept on gazing at his tablet.

About halfway through the journey, Alex's wheelchair rolled as the train braked. I rose up to reorient it to its former position. It was then that the casually-dressed fellow offered to help my wife out of the train as it approached the station. I explained with thanks that we still had a considerable length of travel left. Finally, at our stop, the guy with the long hair took my hint, and immediately arose to help lift the chair out of the train, onto the platform. Much to our surprise, the businessman rose up too, and contributed his effort in lifting of the wheelchair. Then they both returned to their seats.
"How helpful these two were." Alex commented afterwards. "I wish God's blessing for both of them."

As I saw it, it was the casual-dressed chap who had the genuine concern for Alex's welfare, as he had initially made the offer entirely out of his own free will. He was also the first to arise, despite sitting further away from the central aisle. It wouldn't have surprised me at all if the smart fellow contributed out of a pricked conscience rather than out of genuine kindness.

Train journeys. I have read a number of stories of what goes on within a train when on the move. Furthermore, I can compare such journeys with the equivalent made in Italy, or even crossing France on my way to Italy - a favourite way to travel back in the early 1970's with the use of the good old-fashioned boat-trains. One such story appeared in the national newspaper. It had taken place sometime in the eighties or early nineties, when the newly-invented cell phone was as cumbersome as a brick, and looked rather like a brick, too. But it was a gadget that carried a very high status symbol. It was used almost exclusively by the yuppie, an acronymic word for Young Urban Professional, an oft-used term prevalent in the Thatcher years of the 1980's before slowly sinking into semantic oblivion by the mid-nineties. Whenever self-esteem was analysed in those days, the yuppie with his bulky mobile phone, was the yardstick with which one's social status was measured by anyone who thought was worth his salt. 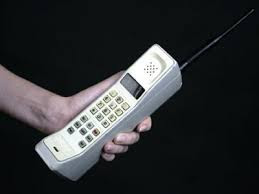 So on that particular evening rush hour, this young, smartly dressed passenger sounded very impressive as he kept his business conversation going while the train he was sitting in kept rolling out of London. As he was talking about trading of stocks and how various companies and businesses were affected by what took place in the Stock Exchange, suddenly someone burst into the coach he was in from the adjoining carriage with a desperate plea for anyone with a cellphone to come and attend a passenger who has fallen ill. Everyone in the packed carriage pointed to the young businessman, who blushed with embarrassment when forced to confess that his phone was, all throughout that time, switched off, due to its flat battery in need of recharging.

Then there was another occasion, at another time and place, and also reported in the Media, of a "yuppie" constantly talking business in his cellphone for a prolonged period of time. So much so, that the fellow sitting opposite angrily opened the window, quickly grabbed the phone out of the young man's grasp, then threw it out of the window just as the train passed over a bridge spanning a river. Everyone within view cheered.

Other related instances have been reported, not necessarily on the train. One occasion involved a staff member of a cruise liner being interviewed by a reporter. This sailor related about how his passengers, all of upper-middle to upper class, changed behaviour after boarding, "going all nautical", and even calling down Bon Voyage to the people waving up to them from the pier below.

"And I always thought it was the other way round." the crew member protested. "Then there is the contest on who would sit at the Captain's Table during supper. Everybody wants to sit at the Captain's Table, and each vie hard for the opportunity." The sailor continued, "They are not sitting at the table for the conversation, you understand. They are there to be seen." *

I suppose that sums it all up. They are there to be seen. Very much like another story, this time about the owner of a posh restaurant. "There was a time when nobody wanted to dine under the alcove," the owner explained. "Their table was rather concealed, it was difficult to spot. But we came up with the idea of raising the floor level under the alcove by installing a platform. Now everybody is fighting for the table under the alcove!" *

Real life stories, all of them true, which brings me back to the smartly dressed businessman sitting in front on the train home. As he concentrated hard on his tablet, he looked to all within the train to be seriously engrossed in some business transaction. But more than likely he wanted to be seen as an aspiring executive rather than actually grappling through a difficult deal. Which has brought to mind the case of one City gent commuting into London with a highbrow newspaper The Financial Times (a broadsheet) held completely to obscure him from all the other train passengers - until a copy of The Sun (a tabloid aimed more for the commoner) fell onto his lap in full view of all those whom such an incident must have delighted. Too bad it wasn't the children's comic The Beano!

And I bet there are many other identical or similar incidents of this kind happening all the time. What is it about us all who are crying out for public respect, to be held to a high vocational esteem, and to be considered intelligent and well-educated? Is office life so demanding that having a laptop open while sitting in the train a life-or-death necessity? In addition, does he then sit in front of the computer at home, burning the candle at both ends, until finally retiring to bed in the twilight hours of the following morning? Or is he just putting on a public show to be seen? And furthermore, what is it about our English culture that obliges us to sit in a train in stony silence? Such as not daring to greet the stranger sitting next to you, or directly opposite? Like at one occasion when a friend and I found ourselves in a packed evening rush hour train pulling out of London Blackfriars, and while I carried on talking, my friend said, rather loudly,
Quiet, Frank. You'll wake up the dead!

Not the kind of words to say back in 1973, while sitting in an international express from Paris Gare de Lyon to Roma Termini. After a fast sprint to Dijon, the next stop was Chambery, not that far from the Italian frontier. It was here that a group of Italian young men boarded the train, and took their seats in the same compartment I was occupying, served by a corridor which ran alongside all the compartments. 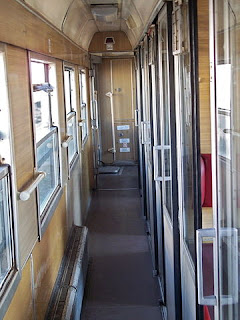 The fact that the stop at Chambery was during the small hours of the night, with daybreak guaranteed by the time we stopped at Italy's first station Bardonecchia, failed to quieten the continuous torrent of friendly conversation which filled the compartment with such a cheerful (if not annoying) atmosphere. Something totally unknown to British Rail in its day! But it was during the following year, in 1974, where I found myself on a very similar backpacking journey, on a train from Foggia, near the east coast of Italy. Here I sat next to a young man of about my age, and it wasn't long before a conversation got going, which turned two strangers into firm friends. At Naples, where the train terminated, he made sure I was settled in my hotel before agreeing to meet up two days later, where he took me, along with a couple of other friends of his, to a beauty spot up on one of the mountains surrounding Naples. As far as I'm aware, for all the miles traveled on British trains throughout my lifetime, I have never found myself conversing with a stranger, let alone making friends. Threatened by a group of youths sitting across the aisle - yes, on one occasion at Ascot. But never the opportunity to make friends.

I can't help wondering: If the Lord Jesus Christ was ministering among us now, and he had to take a morning commute into London, how would he behave? Interesting point, really, coming to think of it. Would he be just like all Englishmen, sitting stoically like a zombie? Or make an effort to interact, resulting in people responding and receiving his love God has for them all?