I was always fond of David Bowie. That is despite only a few songs of his I would endeavour to buy. This would include Space Oddity, Life on Mars, Heroes, Ashes to Ashes, along with any other that made it into the charts. Ziggy Stardust failed to appeal, but to me, no way would that have degraded his superb musical talents. On one occasion he also performed as a duet with Bing Crosby, and sang the main lyrics of Little Drummer Boy, while Crosby added his backing vocals. This looks to confirm Bowie's familiarity with the Christian faith, much of that gotten from his schooldays. Not surprising then, that the announcement of his sudden death at 69 years of age from liver cancer took the entertainment world by storm. So much so, that the death of actor Alan Rickman, of pancreatic cancer, also aged 69 and just a few days after Bowie's demise, passed almost unnoticed. 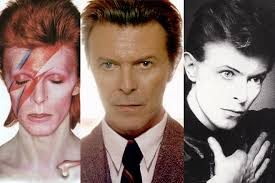 So I couldn't help feeling shocked, while his body was still warm, that a group of American Christians had already recorded a video, Is David Bowie in Hell? available for anyone to view, while his family mourns over him before cremation. What I found shocking about all this was the crass insensitivity in recording so quickly, even while his family were standing around in mourning. By then the video had already collected several thousand views. The truth is, none of us have any right to decide the singer's fate in the afterlife. Throughout the entire Bible, the clues of only three saints were given about their certainty of Heaven, and they were actually seen or witnessed by those around them - Enoch, Elijah and Stephen. Recorded Bible narrations of everyone else, saint and sinner alike, ends with physical death. The silence about the afterlife remains so loud that as a result, the eternal fate of Ananias and Sapphira, recorded in Acts 5:1-11, remains prime examples of debate to this day.

Details of Bowie's infancy remains very patchy, after reading Wikipedia's biography, along with other official websites. There was a hint in a national newspaper, unproven, that from birth, his mother might have been emotionally distant from her son, something which, if true, would stick with him for life. With a 1950's-style schooling including the morning Christian assembly based on the Church of England liturgy, I wouldn't be at all surprised that the schoolboy's perception of God was that of a strict disciplinarian, constantly eyeing for every misdeed yet at the same time aloof, virtually impossible to please, and any good deed done as seen as a means to get something by means of earning. And that is going by my experience of school days throughout the 1960's, which rather than convert to faith in Jesus, (no record of this) instead had alienated quite a number of schoolboys into atheism, with myself included. Indeed, to say that God is love sounds like an alien language.

With a feeling of sexual attraction towards his own gender as well as for the opposite, Bowie could well have developed a guilt towards a stern God he perceived as grossly unfair when considering that his libido responding to same-sex attraction was beyond his control. This he had to keep secret, for fear of reprisals and schoolboy bullying, rejection from society, admonishment from the Church, possibly even disowned by his parents. Little wonder that David Bowie nee Jones embraced the Philosophy of Thelema, which was the brainchild of the 19th/20th Century English occultist and magician Aleister Crowley. Simplified, Thelema is about, "Do as you will" shall be the whole Law. Love is the Law. Love (subjected) under will.

I found Aleister Crowley to be an interesting character. His parents were Plymouth Brethren, which was renowned in those days for its strictness and emphasis in discipline. In many of its churches, Holy Communion was forbidden for visitors, and a dress code was also in place. Each member was evaluated on how much he was devoted to Christ and how committed he was to abstain from sin. In short, his parents taught their young son Lordship Salvation, the idea that - "If Jesus Christ is not Lord of all, he is not Lord at all." Proof of salvation is 100% commitment. If the mark is not adequately met, it proves that the member is not truly saved. Little wonder that young Crowley, after experiencing a childhood of discordance between church teachings and his own experience, totally rejected any form of Christian faith from his life.

Crowley was very intelligent, brilliant if I may say. His interests included mountaineering, an endeavour which I'll admit was never brave enough to give a try. But his rejection of a Christian God also included a rejection of Satan as an entity, being associated with the Christian faith and belief. This may come as a surprise to some Christians who has a smidgen of knowledge about Crowley, whom they have associated with Satanism. Rather he was an occultist, tarot card reader, and a worshipper of the Egyptian entity Horus. He was also a member of the Masonic Lodge, and it was he who fathered the philosophy of Thelema, based on love of self and love being the fulfillment of the will being the final goal to aim for.

Both Crowley and Bowie had the same in common. Both shook off "the horrible shackles of religious inhibitions" and engaged in "free love" - in Bowie's case with men as well as with many women. Therefore, I can't help but see a parallel between Bowie, and who the English publication John Bull referred to as "The most wicked man on Earth." Incredibly enough, just as Crowley boasted that his spirit guide was the Egyptian deity, so Bowie too, while going through the stage of Ziggy Stardust, had the jagged stripes painted across his face in relation to the gods of ancient Egypt. So according to the Youtube Christian video already mentioned.

There are three distinct similarities shared between Crowley and Bowie. First, both rejected the Christian faith whilst young. Secondly, both achieved fame through their talents. And thirdly, both suffered ill health towards the end of life. Remarkably enough, both were addicted to drugs sometime during their lives - Crowley to heroin and Bowie to cocaine. And both were fornicators, with Bowie having a greater number of females in his harem. And with his admittance to his bisexuality, Bowie looked to be more of a rebel against the Judeo-Christian society than even Crowley. And thirdly, both embraced the philosophy that the Law is the self-will being fulfilled by love - which led to free fornication on both cases. It is these parallels that I believe that Bowie was a disciple of Crowley and embraced Thelema. This seems to be endorsed by one of Bowie's pop songs, Quicksand, containing the name Crowley in its lyrics, while another one of his songs, After All, contains a reference to Crowley's philosophy.

Both suffered ill health in their latter years. Crowley from drug addiction and Bowie from liver cancer. I am aware of the conclusion made by many Christians that you reap what you sow. If you sow sin, you will reap death. So biblical and sound. And that was why I felt distressed - not only about the news of Bowie's death, but even more so by the video so quickly recorded. At first I refused to watch it, not being emotionally prepared enough to what I would have had to listen to. So I waited until the following morning when both my wife and I watched it. Surprisingly enough, the video was not as judgemental and decided as was first anticipated. The presenter was open to the possibility that his deathbed repentance might have saved him "like a brand out of the fire."

Which had led me to his Twitter account in referral to God just before his passing. Did he have a change of mind about Jesus, finally believing in his heart that he is the Christ? He might have done, he might not have done. That is why none of us mortal humans are allowed to decide on the matter. If he had made such a positive decision shortly before his death, then right now he would be in Heaven with Jesus. This is the pure unadulterated grace of God, totally dependent on his mercy, and incredibly enough, an indictment to all the self-righteous religious people who has spent their whole lives with the hope of pleasing God continually!

Such deathbed repentance is possible, as aptly demonstrated by the thief on the cross (Luke 23). It is interesting to read Luke's narrative carefully. There was nothing else the thief could do. But as he looked upon Jesus crucified beside him, it became apparent to him that he was innocent of any wrongdoing. With that heart conviction, he had the temerity to rebuke the other thief who was also crucified, and then plead with Jesus to "Remember me when you go to your kingdom" - an indication that this Jesus crucified is the Christ and King. It was this heartfelt conviction and faith which allowed God to save him. 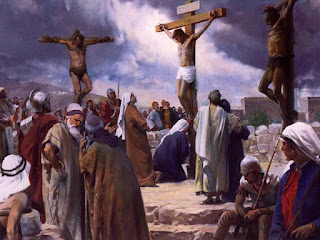 The same could have happened with David Bowie. This is why, I believe, he suffered his last eighteen months of his life with cancer. To give him the opportunity to reflect on his life and his need for God to save him through faith in Jesus Christ. That is all it takes. Once Saved Always Saved. If such a deathbed repentance had taken place shortly before his death, this too would be a rebuke to all Arminian Christians who believe that salvation can be lost if the believer loses faith or sins excessively. As a saint, Bowie could be seen as taking a massive shortcut to Heaven, avoiding all the threats and potential pitfalls in life that would have put his salvation into jeopardy.

I hope to see you in Heaven, David - and receive your autograph.
Posted by Frank E. Blasi at 12:36