The Dark Secrecy Behind The Mask.

Laughed or Ignored? I Prefer Laughed.

A Shock at a London Hotel

At last! A getaway after months of pandemic lockdown. And this includes staying overnight at a London hotel before boarding the mainline train that will depart for North Wales at mid-morning of the following day. The idea of staying at a hotel overnight within the vicinity of the London terminus was borrowed from one of our church elders, who did just that before boarding the Eurostar train to Marseille a few years ago. It saves a lot of stress in having to first travel to London to catch our train. After all, a red light on our own railway line from our hometown of Bracknell to London Waterloo could miss our mainline train out of Euston.
However, pushing a wheelchair with my partially disabled wife and a stack of overloaded luggage has made travel on the London Underground impractical. Therefore, we walked all the way across London from Waterloo Station to the Premier Inn Euston Hotel, about an hour's walk covering 2.5 miles - that is, on our known shortest route via Westminster Bridge, Whitehall, Charing Cross Road, and Tottenham Court Road. But this time we had to divert to protect ourselves.
This was due to the massive crowd of noisy England supporters, just a few hours before the England/Italy European Championship final kick-off. The crowd blocked off St Martins Place simply by sheer numbers, so we had to divert through Pall Mall East, then up Haymarket. But as we turned towards Leicester Square to join Charing Cross Road, someone approached and strongly advised us to continue through Chinatown instead, as there was trouble at Leicester Square, with bottles being thrown by the rioting England fans. It was rather scary, coming to think of it. We managed to rejoin Charing Cross Road via Lisle Street and Little Newport Street - the backstreets of the city which were free of marauding football fans. 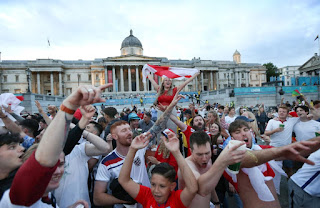 Panic On The Eve Of Glory.

The 5 Animals that Disproves God?

I recall one Sunday evening at Bracknell Baptist Church sometime in the late eighties. We were at that time meeting at a school assembly hall. This was due to the size of the congregation that has outgrown its old building on Church Road. Soon, a new permanent meeting place was to be built and opened, to be called The Kerith Centre.
In the meantime, we met in a nearby school assembly hall. On the front stage stood two women who had just returned from one of the charismatic revivals that were taking place in North America. One of these I have heard about was in Toronto, Ontario, and the other one in Pensacola, Florida. Which one of the two churches these married women flew across the Atlantic to visit, at this time, I can't fully remember, but that doesn't matter. However, the effect their testimony had on us cannot be forgotten.
After several minutes of talking, all of a sudden, the whole congregation went berserk! All around me, people - fully grown adults - started to wail, to cry, to laugh, to scream, to make strange noises. There was violent body shaking, trembling of the hands, and people falling to the floor. The whole scene of pandemonium was so chaotic, any child or unchurched would have doubled up in fright. 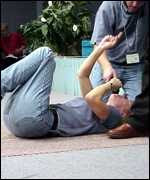 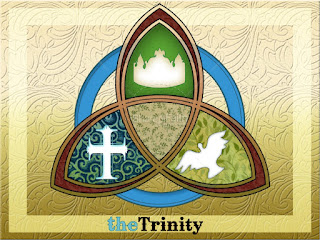 If this wonderful plan of salvation is to be set in motion, then Jesus had to die by crucifixion on a cross (note: not merely impaled on an upright stake!) Then He was buried and on the third day, rose physically from the tomb. The Watchtower denies a physical Resurrection. Instead, they promote only a spiritual one, the ghost of Jesus rising from his dead body. But the physical Resurrection of Jesus Christ is absolutely essential for salvation, as Paul writes in 1 Corinthians 15. Again, that's worth reading on its own. If Christ did not rise physically, then there's no salvation.
I have a lot of respect for Harrison Cother. His gentle spirit while explaining why he has turned to atheism had earned my respect and not any form of judgement. If only he understood the very glory of God in his plan of salvation, that is way, way better than what the Watchtower can only offer. Who knows, he can see how bad our present natural world can be, and still trust in his Triune God for his wonderful salvation.
Posted by Frank E. Blasi at 13:59 3 comments:

John Bull: Should I Support Him?

Daniel was one Biblical prophet I have learnt to admire. According to what is recorded of him, he was very well educated and had exceptional qualities. He was also trustworthy, he was also very loyal to the king, and there was no corruption in anything he did, nor did he ever show any negligence in his calling. And how devoted he was to God, trusting in Him completely and praying regularly in the privacy of his own room every day. He was also innocent of any blatant sins, such as adultery and murder, two of which King David was guilty of during his lifetime, around four hundred years earlier. Yet, David too was referred to as "a man desiring God's own heart" - according to his biographers.
Daniel's faith in God was so strong that he wasn't afraid to be thrown into a pit containing hungry lions. And that was what his associates desperately wanted - for him to die - but not peacefully in his sleep but with intense pain and bloodshed by the sharp-toothed jaws of these feline predators. Their motive was jealousy. That deep resentment felt among them after their inability to interpret dreams the king had, nor were they were able to read and interpret the supernatural writing on the wall which foretold the Babylonian king wanting - and his resulting demise that very same evening. Yet, the prophet was able to solve these difficult problems with remarkable ease, giving them the impression of superior intelligence, learning, and power. 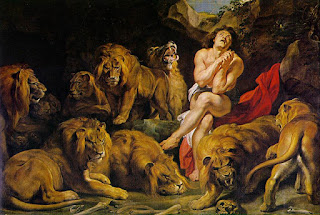