As one who is committed to blogging on a weekly basis (or any other basis), there are times when, as the weekend approaches, I find myself pacing around the room asking myself, What shall I write about this week? - as I try to look for inspiration. Then, at the last moment something comes up, even at the most inappropriate places, which cause me to think, Ah! Consider this graphic which appeared on my Facebook wall, posted by a good friend of mine: 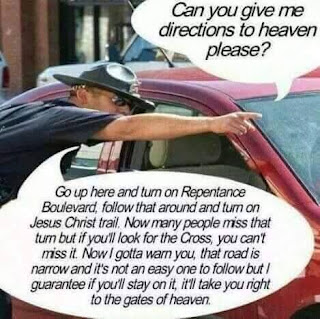 I guess the one giving directions is an American Police Officer or a Sheriff (there is nobody in the driver's seat otherwise) who gives the impression that he would be far more committed in following either the New York Giants, the Dallas Cowboys, or the Chicago Bears, rather than in religion or spiritual matters. And what he answers to the inquiring driver looks at first to be a catchy phrase. After all, it was none other than the Lord Jesus himself who brought up the parable of the two roads: to put into American terms, the Boulevard and the Trail (Matthew 7:13-14).

The illustration speaks even more than its initial implication. Anyone can drive a car along a boulevard, but driving a car along a trail would be nigh impossible, if I understand the American meaning of the word. It has always come to me as meaning a hiking trail, or footpath - as we call it here in the UK. And probably the best hiking trail I have ever navigated was the Bright Angel Trail leading from the South Rim of the Grand Canyon to the Colorado River.


And that what makes hiking on a desert trail such an exhilarating experience - no cars. Just the sound of wildlife and of my own footsteps breaking the otherwise utterly still silence. Nearer to the river, the continual, non-stop screech of millions of crickets and other bugs brings the environment to life, along with the backing sound of the river as it flows over the rapids. The sounds that either cannot be heard in a car, or it is restricted by traffic noise.

If trail hiking could be seen as exuberant as Heaven itself, then that is quite a point. Of course motoring has its advantages. It gets you over a long distance from A to B with very little effort, and you can travel in all weathers with minimum discomfort. Sure enough, hiking under the hot sun without an adequate water supply, along with a shortage of electrolytes and food can lead to heatstroke, even hyponatremia (if not adequately supplied with electrolytes) or hunger. There is a record of death among hikers in the Grand Canyon who proceeded with their journey without proper provisions. And I myself watched as I was overtaken by a ranger leading a distressed hiker on a mule back to the park village. But having said all that, hiking is without doubt a very rewarding experience, taking in the sights which would never be seen from a car window. Then there's the hassle of driving itself  - the morning commute to work in the pouring rain, stuck behind a slow-moving truck, caught in a long stationary traffic line, another driver cutting in, horn blasts, lights forever on red, gasoline costs, oil and maintenance, breaking down at the middle of nowhere, tax and insurance, feelings of frustration, foul temper, collisions - often fatal. Such are the joys of motoring!

But the point the sheriff was getting across, I believe, was about leaving the car behind at the trailhead. If I have a proper understanding of American terminology, you cannot drive a car on a trail or footpath. Such being the case, it is implied in the graphic that the car is left behind at the trailhead, and the believer continues his journey on foot. I see some good Biblical parallels here. The car represents the easy life of self-centredness, the cause of sin, and in full control of one's life. The highway is broad, smooth and fast, leading to the possibility of a fatal collision. At the turning, one sees the Cross and believes, leaving the symbol of his former life behind, and following a trail, littered with boulders perhaps, but already appreciating the beautiful flowers blooming on the edge, together with fantastic views, both of which he had never noticed before. Sure, the Christian life is not all plain sailing, as the boulders represent, but with God's help, they can be overcome.

A good illustration, or maybe a lousy one - it's up to the reader to decide. But one thing I did see which caused my face to drop in disappointment, and that was after the Gospel was delivered, the sheriff rambled on: I guarantee that if you stay on it, it will take you to the gates of Heaven. The reason why my face dropped was because this implied that the grace of God is not enough for salvation, human effort is needed to supplement God's free gift, and to add to this, the Cross did not impute the righteousness of Christ into the sinner's account, as the Bible teaches (Romans chapters 3, 4, and 8). Instead, all it did was to wash away all his past sins, making the believer wary of not straying off the set trail. This reminds me of a painting based on the parable of the two roads, one leading to death and the other to life. And the painting depicts a third path branching off from the way to life, and leading to death as well.

John Bunyan, in his 17th Century book Pilgrim's Progress, depicts this turning off the road to life, onto a path that looks more easier to walk on and looking less unpleasant, but afterwards finding himself in a difficult or threatening situation. Arminian scholars has used Bunyan's work as endorsement to their insistence that a believer can lose his salvation if he strays away from the faith. The illustration above also says it well. However, after some discipline the author had to go through to learn his lesson, he finds himself back on the road to life, and not ending in death. But more relevant to this, the Lord only used two routes in his parable, not three or more. The third path was added long after Jesus was crucified and risen, and long after the churches had become established in Europe and elsewhere. The idea of a third path was added by man, and it has never been part of the Bible itself. Yet it seems to be accepted by many Christians to this day.

If my experience has anything to go by, I have seen many Christians who believe that salvation can be lost living their lives more seriously and less joyfully than those who believe in eternal security. There were times when I had questioned whether they were the most pleasant people to have around, and to my dismay, often (but not always) they were not. In the past I have found the atmosphere heavy by their presence, which bid me to leave, and not return. Back in 1994, one fellow looked at me with a fierce expression when I said I believe in Eternal Security, and made no effort to hold back in rebuking me for such blatant "heresy." He was often seen praying aloud as he paced back and forth in the living room in front of his young daughter, for whom I felt much pity. Furthermore, also back in the 90's, I felt helpless when a friend of mine was verbally bullied by the entire home group for believing in Once Saved Always Saved. Even the leader's wife rose from her chair with anger. Not long after this, the group dissolved. More recently, I know of at least one person with the same beliefs who actively dislikes me, and even foretold my eternal fate with the Lord's words:

The very fact that this fellow used the Lord's words to actually wish me to Hell for all eternity says a lot on his own perception of God. I have learned that it is not difficult to see how a fellow believer perceives God's character. Just watch how he relates to others who may not agree with him, especially in matters pertaining to salvation. However, try to picture yourself in that crowd to whom the Lord was addressing. You just heard him saying that not everyone who calls him "Lord, Lord" will enter the Kingdom of Heaven. He then adds that they will be many who performed amazing works who will also not be let in. How would you suddenly feel? How would you respond to such declarations? Would you instinctively ask him, What must I do to do the works of God? (John 6:28.)

Looks familiar, doesn't it? And this took place roughly in the same region as the words depicted by Matthew. This is the work of God, that you believe on him whom he has sent - v.29. Although the New testament does not say this, such two discourses could fit into each other as one conversation. The Lord's initial declaration and the natural human response go together. And the Lord answered that it is the work of God. If it is God who does the work, then he won't be making mistakes. Yes, I could stray from the road of life, but because of his love, he would bring me back on track. Just as was the case with John Bunyan's Pilgrim's Progress. Or the trail inside the Grand Canyon. At Plateau Point, the trail begins to cross a level area known as Tonto Plateau. If I strayed from the trail at this area, I would be able to walk on the level ground for a while, but to ascend back to the rim, I must return to the trail. There is no other way up unless I endanger myself.

Hiking is to me at least, a good illustration of the Christian life, a walk with God. Although I chose the Grand Canyon, having hiked it myself, there are many, many natural wonders around the world which are magnificent hiking areas. Each is unique, having its own beauty. But one of the basic truths with trails is that cars, or any other motorised vehicles, don't use them, as in most cases they cannot. I guess the same applies to justification by faith. With this, the righteousness of Jesus Christ is imputed into the believer. Since Jesus had never sinned, this makes His righteousness eternal, making us fit for Heaven, where sin cannot go. As the Sheriff should have answered,
Leave your car here, and start hiking the trail with the Cross of Christ at its head. Heaven is guaranteed!