Lord Sugar at the Kerith? Thanks, Ascot Baptist...

Jeff (name changed) appeared suddenly at Bracknell Baptist Church during late summer, 1978. He was tall, extraordinary good looking, had longish hair, wore a orange satin silk shirt which was open at the neck to display a silver cross on his chest, and played his part well as a proud strutting peacock. He certainly performed well as a group of young ladies, including his future wife, swooning over him and baying for his attention as any female fan of a well known pop idol such as David Cassidy, Englebert Humperdinck or Cliff Richard, would have done a decade earlier.
In turn he boasted of his university degree and his prospective career as a Computer Programmer at a high tech company, one of several that had set up office to trade in what would become the Silicon Valley of Britain, straddling across the M3 and the M4 motorways (freeways) branching out of London.
But Jeff did not only attract the unmarried ladies in the church. He also caught the attention of the Elders, or Deacons as they were called in those days. In next to no time they were swayed by his charm, confidence and high level of education. He became the only unmarried house-group leader, a status looked with seriousness in those days, with conditions that the leader should be married and have full control of his children. (For those not in the know, a house-group, sometimes called cell-group, or as today, life-group, is a group of church members who meet at a private home during the week. Usually the leader is the host himself, but that was not always the case. We hosted house-group on several occasions, and allowed the guest leader to continue in his duty as normal.)
But the bane of all this was during singles evening, when we all met at a deacon's home on Sunday evening, after the service. This particular elder, who moved away from Bracknell during the late 1990s and no longer at the church, was a devout Englishman and a Tory, and I believe, a devotee of, or at least sympathetic with the school tie and the class system. It was through him, in the late 1970s that my delusion with Englishness has had it roots, along with a rotten sense of self-esteem.
Activities were organised at his home to strengthen fellowship and our spiritual health. One activity was tennis. Who arranged it? Jeff. And who learned the intricate switching of the church heating system? Jeff. And who organised other group outings or activities? Jeff.
When I offered to take on a responsibility, I was told that I was not capable of it. How did he know?
"You don't look confident" was his reply. "You're not even sure of the task, aren't you?"
And not to mention that my speech and accent in no way convey confidence!
What a put down! And how all this made me feel small and insignificant.
And that despite that on one evening Jeff was actually called a big-head by the Pastor himself, right within earshot. More than once as well.
All this was the theme of my last blog, Come on, Lord Sugar... where I demonstrated the consequence of the British class system and how it could influence the local church back in the '70s and '80s, a period when I was still looking for my personal destiny.

But in this blog, which could be considered as a follow up to my last one, I want to portray the positive side of having fellowship with Christian believers. Most of my friends were and are Christians.
But should the reader get the impression that I was a castaway in the fellowship, this wasn't true. There was Derek, who told me that he was impressed with my knowledge of the Bible and the faith I had in it. A lovely complement. After moving to Milan as part of his employment contract, he invited me over twice, in 1981 and again in 1982. He hosted me for a few days both before and after a stint of backpacking around Italy, including Sicily.
Also in 1981 a new friend, Geoff, arrived at Bracknell. He took up employment at the same company as Jeff. He also took up residence with two other graduates, Jon and Tim. Geoff was keen to learn to play squash, and it became a custom that every Tuesday Geoff and I would pair up and play squash together. After this, we walked back to Jon's house, where he lodged, for a coffee and toast. It was here that Jon, Tim and Geoff became good friends, much to do with teasing each other. Jon came down one late evening with a hot water bottle, a specific Englishman's companion when bedding on a cold night. It became the butt of constant joking and laughter, but it bonded friendships.
Tim was to play an important role in my life. In fact, I can credit him for changing my life altogether. An accountant, he played rugby, became a coach then team manager of a football club and a devout Christian, Tim was the one who directed me to my destiny. In more ways than one. Aside from wrestling with each other and trying out our physical strength, he also become my house-group leader, and he was the one who would open the door to let a little of the Alan Sugar in me to come out, after being shut in for so long after being told many times of my incapability.
Tim eventually left Bracknell Baptist Church, the forerunner of the Kerith Centre, and joined Ascot Baptist Church, of a town three miles from Bracknell. But by then he was already Chairman of Bracknell Saints Football (soccer) Club, consisting of players both from Bracknell and Ascot Baptist Churches. While still at Bracknell, Tim became involved with a hospital therapeutic broadcasting station, Radio Heatherwood. (Heatherwood being the name of the hospital.) In truth, it was a cable service, not a proper radio. But after become team leader for the Friday Crew, in Spring, 1981 he invited me up to give it a go as a Presenter. From that first Friday evening I became hooked, and I was to be presenting for the next five years, during that time Tim had moved on, mainly due to his temporary work location, and team leadership was thrust into my hands by the Chairman of the League of Friends (which owned and ran the station).
It was on one occasion that Radio Heatherwood began to run low on funds. So I made the decision to run the 1984 Bracknell Half Marathon, collecting sponsors from both Bracknell Baptist Church members and window cleaning clientele. As a result, the funds were raised which restored the station's financial balance.
It was also then I began to get to know two more Christians, Keith of Ascot Baptist and Gareth from Warfield Parish Church (of the Church of England). Gareth, who worked in a Bank, moved into Tim's house which, like Jon's, was also near my bachelor's apartment. All committed Christians, we had something in common between us.
So there were times when Tim, Gareth, Keith, sometimes Paul (another Christian from Ascot Baptist) and I went out cycling together, both in the UK and abroad. One of the most remarkable trips we did together was Holland, Belgium and Germany, one long circuit which linked all three countries. 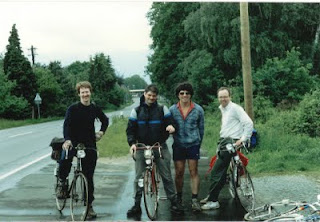 With my Christian mates

Then in 1986, I completed another half marathon, which in the same race was a friend from the Reading Life-saving Club. He was the one who introduced me to the sport of Triathlon, a multi-discipline race of American origin, consisting of swimming, cycling and running, normally in that order.
I handed the reigns of leadership of the Friday broadcasting crew to my successor, another Christian, this time from Bracknell Baptist, and joined Thames Valley Triathletes, one of the UK's largest triathlon clubs which was based in Reading, and soon after I was training with them and competing in triathlons across Southern England. Venues included Swanage, Bournemouth, Winchester, Newbury, Farnham, Arborfield, Reading, Hampton Wick, East Grinstead, Romford and Eastbourne.
It was at Winchester of Summer 1986 that while competing in one event, something of a vision took place in my mind. There was no triathlon in my area, whether in Bracknell, Ascot or any other locality. 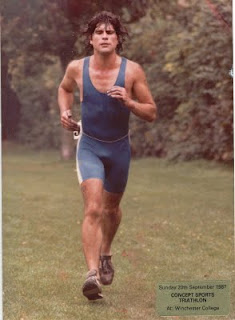