A Duvet at Church...

For some months I have been impressed with the church which meets at Westminster Chapel, a short walk from London Victoria Terminus Station. My first Sunday visit was earlier this year, back in June. I have known Westminster Chapel for quite a number of years. It was here that Alex my wife and I had attended the all-day Prayer for Israel conference one Saturday in 2000, which was led by the late Lance Lambert, a student, advocate, and expounder of Bible prophecy, particularly on the future restoration of Israel as a theocratic nation with Jerusalem as its capital. But equally impressive was a Saturday evening inter-church meeting about leadership, which was held there around the mid 1990's, to which I was encouraged by members of my own fellowship to attend. The place was packed. Not only was the central auditorium full to capacity but also the two tiers of balconies on each side were full. This resulted in a tremendous atmosphere, especially when the more popular or well-known songs were sung during worship. 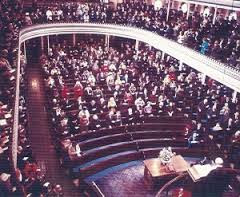 So with such memories, I made a return visit to Westminster Chapel last Sunday. As I approached its main entrance, I could not help but notice a large day-glowing duvet or sleeping bag lying as if rolled on one of the church's front windowsills, facing the street. Suspecting a sleeping victim of homelessness, I decided to let him sleep on, and entered the building.

Like as June earlier this year, the building was nowhere near full, unlike that of the leadership meeting back in the nineties. Various pews in the main auditorium remained empty, as well as the balconies. I was even the sole occupier of the pew I sat at, not far from the front. It was then that my spirit fell. In a modern cosmopolitan city such as London, how I long to see this building packed out on a Sunday morning! I found myself thinking, if not praying, Lord, I long to see this place filled to the brim on any Sunday morning! How I would love to hear the praises thunder so loudly that even the roof itself gets blown off from its place! The light of Glory right here in central London! This was when I realised how much I loved this church, and had I lived in London, I would have had no hesitation in applying for membership.

Westminster Chapel presents the Gospel and Bible teachings in a fundamental, straightforward manner, which I find very edifying, hence my fondness of the venue. The emphasis of Eternal Security of the Believer can be felt as I listened between the lines of the sermon. That week, before the main preach, there was a children's slot held in the auditorium before the youngsters were despatched to their departments. The children's theme was about hypocrisy. A mini-drama was staged by two London University students, about a "perfect Christian" who boasted about all the good things he does in public on a daily basis, along with his boast about abstaining from evil. "Wow! What a pillar of church society!" - That is, until someone checked his Facebook and Twitter profiles, and discovered that he lied frequently, and was secretly dishonest with his money, particularly on tax evasion.

Whoops. It was at this point when I felt the Holy Spirit point out several things in my life, and gave me an opportunity to confess quietly to God. I thought about the homeless individual I passed as I entered the building earlier. Hypocrite? Perhaps that is a matter of opinion. But seeing someone with a begging bowl sitting on the side of the street doesn't generally stir compassion within. Not to say that I never felt for the beggar. I recall when I was in Jerusalem back in 1993. For days, I could not take my eyes off this elderly gentleman sitting on the grass with his back leaning on the medieval wall of the Old City, not far from Jaffa Gate. His left leg looked as if he was badly injured, and let's face it, his lower leg did look rather ghastly. Out of goodwill I gave him a fair sum out of my funds. He looked very grateful as he took the cash off me. After this, he vanished, and I saw him no more throughout the rest of my stay in Israel.

As I pondered over this fellow and his sudden disappearance, slowly the truth began to dawn. His leg wasn't injured at all, but had a fake makeover, done very professionally, to attract the likes of myself. But rather than feel duped and a gullible fool, I allowed the matter to pass, and gave thanks to the Lord for the privilege for my ability to give. After facing an aggressive female beggar at 5th Avenue New York City in 1995 (and she was young and pretty, not old and looking unwell) I decided to revise what I have read what goes on behind the image of street poverty. One reliable source was Brian Moynahan's book Fool's Paradise, where he interviewed some beggars at the Champs Elysees, Paris. After his research revealed that a number of them congregate in the evening with the day's takings at a bar in a backstreet, and celebrated with champagne. He informs us that the beggars are at work when the public are not. He then reveals the Newspaper Ploy carried out by one, and the Telephone Ploy acted out by another, where each asking passersby whether they could donate towards buying a newspaper, or towards phoning his mother living in Germany. In addition, they always make sure that their clothes, although looking threadbare, are always kept clean, and dress reasonably. Over in Israel, I was the gullible victim of what I could refer to as "the Injury Ploy."

Then I recall when I took Alex my wife up north to Chester, a historic medieval city built on and around a Roman fort. The River Dee flows through the city, making the promenade a popular walkway. One evening, we saw a man lying by the edge of the river, and his companion begging for help. It does look as if the one lying on the ground was seriously injured, and I wondered why an ambulance wasn't called. That's when his companion explained that he didn't have the money for the phone call. Wised up already, I smelled a rat, and said to my wife, "Come, let's leave." We were chased over a short distance. When I turned around to look behind us, lo and behold! The injured person had instantly and miraculously recovered, and joined the chase. Fortunately we kept going when the two gave up on us. 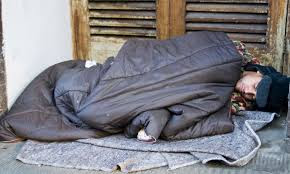 When it comes to street beggars - really, I find it very difficult to discern the true from the false. I have wondered how would Jesus react if he was around today. I don't think he would have tossed a coin into his plate or bowl. Instead, he would give the order, "Follow me." Therefore, rather than give directly to the street beggar, I prefer to give towards charities which deals with the genuine poor. If the charity is Christian, such as Tearfund or Compassion, all the better. But wherever I'm generous or stingy, discerning or gullible, wise or foolish, this I know, without Christ in my life, my own righteousness will never meet God's demands. I live by his righteousness imputed into me, and not my own.

Going back to the homeless person sleeping on the windowsill of Westminster Chapel, he was not actually begging. Instead, he was sleeping. I have wondered what all the other worshippers were thinking as they walked past to enter the building. Was it a common sight, something so familiar that they have became insensitive to his presence? Or was it something of sudden appearance numbing the thinking and decisions of all who passed by? After the service was over, many of us congregated for refreshments afterwards, yet I heard no mention of him. This post-service coffee seems to be becoming common in many churches - the serving of coffee after the service which, no doubt had its origins in America, when in 1978, I had coffee and doughnuts at the First Baptist Church in Portland, Oregon, something still unknown in churches throughout the UK. Another example of Britain harrumphing whenever America coughs?

But as far as I recall, nobody mentioned the homeless sleeper outside. It was as if he wasn't there. Was he deliberately ignored? It felt strange, as I see it, sleeping at a location where just a pane of glass separated him from the message of the Gospel. And yet he slept on outside, while all of us inside were recipients of the Good News. But do I blame the church for making no effort to invite him in? No, I can't, since I have had no inkling of how such a circumstance came to be. How can I prove whether or not he has made this particular window his home, and whether or not had the church invited him in over and over again, and yet he fully resisted? Had any members brought food to him in the past? This is something I would never know. Likewise, if I were to go back to Westminster Chapel this weekend, would he still be there, wrapped in his thick sleeping bag as before? Or would he have wondered off into the horizon, carrying his thick duvet with him, never to be seen again except by some sheer coincidence?

Perhaps fully aware of my own shortcomings, after coffee I exited the chapel, only to see the man stirring in his duvet. Alone, I called out to him, asking him if he was homeless. When he answered in the affirmative, I took out my coin bag containing some small change. I took out the only £1 coin I had and gave it to him. "Here, take this, and have a bowl of soup on me."

Maybe, just maybe, he had a glimpse of the Gospel in action. Who knows.

For more reading of my visit to Westminster Chapel in June 2015, click here